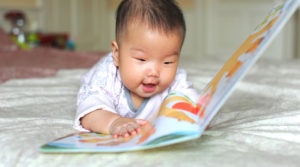 Don’t know what to buy that special little one in your life? New research suggests you should keep it simple and save your money. No need to buy the flashy, expensive toy that’s touted as “educational.”

According to the December 23, 2015 online edition of JAMA Pediatrics, researchers at Northern Arizona University found that electronic toys that light up, talk or play music might slow language development in toddlers. The study included 26 babies aged 10-16 months and their parents. Each family was given three different sets of toys. The first set included electronic toys such as a talking farm or a baby cellphone. The second set were traditional toys such as puzzles and blocks and the third set were board books. Researchers recorded interactions within the family’s homes.

Results showed that when babies played with the electronic toys, the parents spoke less and responded to the baby less. The babies also produced less vocalizations and content specific words. In contrast, books produced the most verbal exchanges between parents and their babies. The study also found that playing with traditional toys may result in verbal exchanges that are as rich as those that occur during book reading.

In short, researchers found that when the toys talk, babies do not! Encourage language development in a child by reading books to them, or working on a puzzle with them!

A native of Cleveland, Maureen graduated from Cornell University and the Cornell Institute for Public Affairs. She is a former congressional liaison with a background in nonprofit communications. Maureen believes strongly in the mission of the Orange Effect Foundation as she has a daughter who benefited significantly from speech therapy.