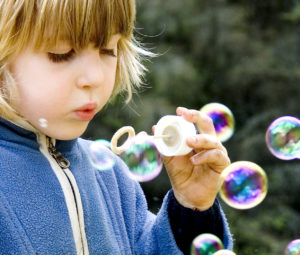 My daughter G is delayed in her speech as she is Globally Developmentally Delayed. She started walking a month before she turned three years old and that took a massive amount of intense physiotherapy to get her to that point.

When she began walking it was like a dream had come true. It was never certain she would walk. The endless tears we would have just to achieve rolling onto her front made the dream seem very distant.

But she made it.

Now a year on — although still unstable and needing further physiotherapy to build strength and learn new skills–like climbing the stairs–I can relax in the knowledge she can walk and just hope she is able to achieve enough strength to be able to walk unaided in the future. The next area we are tackling with ferocity is her speech and language.

From six months old, G babbled and though it was indicated with her condition that speech is often delayed, I remained in my bubble of denial that she was not falling into that category and would speak just fine. When she babbled and made sounds it was the confirmation I needed–she was going to speak just fine. However, by a year and a half old she was still babbling just the same. Finally, at age three, I got a private speech language therapist.

That was a MASSIVE turning point.

Play with your child – This is so basic and I know we all do, but taking the time to switch off all distractions and give your child your undivided attention is an unimaginable boost for them. Playing 1:1 gives you the chance to really engage together. There is opportunity for your child to hear you more clearly, look at your mouth, and imitate.

Let Them Lead – I did not realise how much I lead my daughter’s play, picking the toys, modeling activities. A lot of the time she showed no interest and so I would lose interest in playing too. Letting your child pick a toy and initiate the “game” opens up a world of possibilities. Often, children will make sounds during play. This is your chance to promote language. So as they bang their truck against the table you say “bang, bang” (instead of “stop banging!”)

Be Silent – So you’ve said, “bang, bang.” What now? Go silent. Resist the urge to say “say bang.” Go quiet (for a few seconds, not the rest of the game!) Quite often they will try and imitate or make a sound to show they understand. If not, just repeat the sequence. And go quiet again. Silence gives them time to respond. Whatever they respond with, congratulate them: “Well done! Yes, bang, bang, bang!”

Congratulate Them – Positive affirmation is a great motivator. Who doesn’t love hearing “Well done” and “good job?” This way, they will be motivated to try again.

Stop Asking Questions – “What do you want to play?” “This one?” “No?” “What do you want to do?” Try and limit questions. Instead, rephrase to statements–“Let’s go and play!” “Let’s pick the truck, doll and ball.” “Okay, we are finishing the game now.” — This models the context. The language and symbols become more familiar and there is less pressure to answer a question. What I found when I did this is that my daughter started to initiate play more–and verbalised with gestures (i.e, pointing).

Use Their Interests – My daughter loves music and dancing. This was a great motivator. I would play YouTube music videos and pause them and shout “Stop!” and then press play and shout “Go!” and she loved it and started to mimic. This explains why Justin Bieber has 1 billion YouTube views for “Baby!”

Sit In Front of Her/Sit Close – Be close by when you speak to ensure they know you are talking to them–no more than one meter I was told. Being able to see our mouths when we speak promotes awareness about where and how sounds are made. Children will begin to mimic more and more.

Turn Off the TV – TV is great, even for language. However, having some time each day without the TV provides more opportunity to be around language and copy it.

Be Enthusiastic – I have to say my mum, dad, brother and I are all a little flamboyant when it comes to playing. We play with energy, laughter, bundles of enthusiasm and it just excites G. She screams, laughs, and wants to join in. This is replicated within some (I can’t be enthusiastic all the time!) of our play, especially when speech and language is the focus. Keeping their interest is half of the battle won.

Have Fun – I found this very tiring when I first began. I didn’t know how to play with my daughter as weird as that sounds. I was a therapist mummy, always mentally ticking off Physio/Occupational Therapy goals within every activity. It was draining and calculated. This was totally different–you had to let go and let them be themselves and help ease the language into the play.

After the first one or two sessions I saw a MASSIVE improvement in G’s speech. She started saying “Come on!” when she wanted to play. Her play skills suddenly developed and her attention span extended. She started saying “Mummy,” which was emotional (still is!) and she is getting stronger each week with her language.

We still have a long way to go. We are at 2-3 word sentences but she is getting a lot clearer and enjoying using her language more.

Caring in the Chaos is written by Nadine, the parent of a special needs child who uses her blog to connect and share insight with other caregivers. Nadine and her daughter, G, reside in the U.K.
http://caringinthechaos.co.uk/10-tips-to-boost-speech-and-language-in-your-toddler/

A native of Cleveland, Maureen graduated from Cornell University and the Cornell Institute for Public Affairs. She is a former congressional liaison with a background in nonprofit communications. Maureen believes strongly in the mission of the Orange Effect Foundation as she has a daughter who benefited significantly from speech therapy.